Jamie Brennan nominated for GAA Player of the Week

Donegal’s Jamie Brennan is one of this week’s three nominees for GAA.ie Footballer of the Week. Galway’s Sean Kelly and Kerry’s Stephen O’Brien are also nominated.  The voting process is simple: like their image on the GAA’s official Instagram page. Voting closes at 12pm tomorrow Tuesday, May 10, so get voting.

In an Ulster semi-final that ebbed and flowed, Jamie Brennan was a consistent attacking threat for Donegal against Cavan. He finished an impressive afternoon’s work with four points from play.

Full-back has been a problem position for some time for Galway but team-captain, Sean Kelly, has looked very impressive in it this year. He excelled again in the Connacht semi-final against Leitrim, not only with his defensive nous but also his ability to power up the field to initiate attacking thrusts.

Even when Kerry struggled to play with fluency against Cork in Saturday’s Munster semi-final, they could rely on O’Brien to bring the fight to the rebels. He scored two points from play and ran himself into the ground.

Players of the Week are decided based on votes cast by followers of the Official GAA Instagram page. 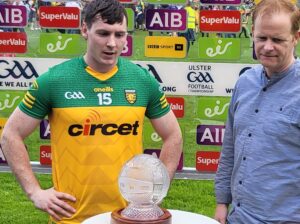