Declan Bonner is standing down as manager of the Donegal Senior squad having piloted the County to Ulster finals in four of his five years in charge, winning two, and also securing national success with the Allianz League Division 2 title. Having also won Ulster titles in his time in charge of the u21 and minor squads as well as the Jim McGuigan and Buncrana Cups Declan has been a dedicated and very successful servant to the Green and Gold of Donegal. As PRO, it has been an honour to work with Declan over the last four seasons and in that time he has always been professional, flexible and generous in his time when dealing with the media or promotional initiatives.

Declan’s own statement is as follows:

I am stepping down with immediate effect from my role as Donegal Senior football manager. It has been a great honour to manage this team over the past 5 years, as it was to manage the teams from u16 level up in the 5 years before that. Highlights from my time in the role include competing in 4 Ulster finals and winning 2 of these, back to back, in 2018 and 2019. I am proud to leave the team playing league football in Allianz League Division 1 next year.

I would like to thank each and every player involved with the team over the past 5 years as well as every member of the management team during this period. Their commitment and work ethic was inspiring and working with them has been a privilege. Thank you to the County Board for their support throughout and in particular, our chairperson Mick McGrath for his support. We didn’t always agree on everything but both of us always had the best interest of Donegal at heart.

Club is the heart of the GAA and I would like to thank all 40 clubs in Donegal, in particular my own club Na Rossa who have been a brilliant support to me always. I would also like to thank the genuine Donegal supporters, most of whom I know personally. Many have travelled the length and breadth of the country with the team and I know they will be back in the stands and terraces supporting the team next year.

Thank you to my wife Catherine and our family Amara, Christian, Arianna and Cillian for their patience and support always.

County chairperson Mick McGrath thanked Declan for the 10 years of service to County teams during which time he won ten trophies. Mick announced that the County Executive would be selecting a 3-person panel to liaise with parties interested in taking over management of the Senior Squad. Donegal clubs are also free to nominate candidates with a deadline of August 15th  for sending them to the County Secretary. 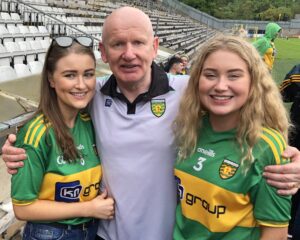