All at CLG Carndhomhnaigh were very sorry to hear of the passing of legendary Dublin midfielder Brian Mullins. Brian and his family transferred to CLG Carndomhnaigh in September 1991. Brian lined out on many occasions for the Carn senior team and will be remembered for the equalising point against Four Masters in the 1996 Intermediate Football Final. Brian also played hurling with the club. No job was ever too small for Brian and on many an occasion was seen raking the grass and lining the pitch in the old O Doherty Park.

Brian was very instrumental in setting up the Saturday morning football coaching programme for the club in 1996 and put great emphasis on coaching the 6 year olds. He also played a big part in our club lotto on a Wednesday night and selling on a Saturday night from 1996 until his move back to Dublin in 2002. Brian was a true club man and on many occasions he invited his former club mates in St Vincent’s up to Carndonagh. Ar dheis de go raibh a anam. 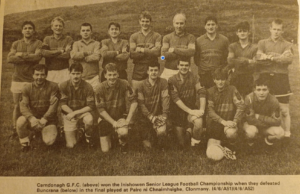