The two berths in the Nickey Rackard Cup final remain in the balance as Donegal and Roscommon entertained in a dramatic game in O’Donnell Park, Hurling well and with the breeze in their backs the home side looked like they were taking control when they led by 0-14 to 0-9 early in the second half but a soft goal re-invigorated Roscommon and it was nip and tuck until Donegal again took control with five points on the bounce to lead 0-21 to 1-13 and with an extra man heading into the last seven minutes. 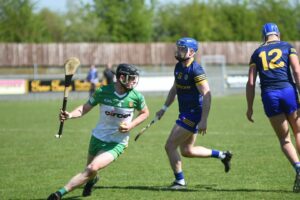 A penalty for the visitors that also saw Donegal defender Stephen Gillespie black-carded gave Roscommon a lifeline they grabbed with both hands and a second goal and a trio of points saw the sides level as additional time loomed. Having dominated for so long it seemed the game had been snatched from Donegal when Roscommon netted for the third time to leave it 3-16 to 0-22 but in the second minute of added time captain Ronan McDermott rescued Donegal’s Nickey Rackard Cup dreams with an equalising goal. 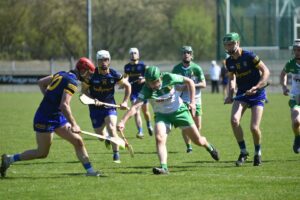 In Carrickmore, Tyrone maintained their 100% record with a 3-17 to 1-15 win over Armagh to go top of the table. Their last two games, however, are against their remaining challengers away to Roscommon on Saturday May 7th and against Donegal in Carrickmore on May 14th. Next up for Donegal is a trip to the UK to play Warwickshire in two weeks time. 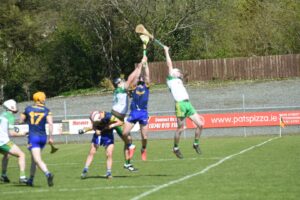