Comhghairdeas to Hannah Shiels of Fanad Gaels who was honoured last night by Ulster GAA in the Manor House in Enniskillen as the young volunteer of the year. Hannah was originally chosen back in May as the Translink Young Volunteer of the month. Well done Hannah.

Liam McElhinney, chairperson of St Michael’s picked up the Ulster GAA Community Engagement Award on behalf of the club for their peerless work in the Creeslough area following the tragic explosion in early March.

Donegal man Conor McDonnell, originally from Bundoran and now living in Monaghan, was given an Ulster GAA Special Presentation to mark his election as Uachtaran Tofa @GAA Handball. Congratulations to all. 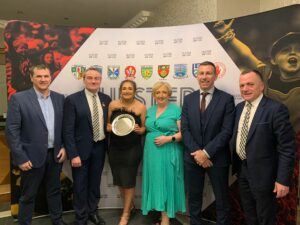