In one of the closest games imaginable Downings pipped Malin to the Marleys.ie Division 2 league championship with a goal from a 14m Johnny McGroddy free that was virtually the last kick of the game. McGroddy frees were a feature of the games with a free in added time at the end of sixty minutes bring the game to extra time. Congratulations to Downings but hard, hard luck to Malin who played their part in a pulsating encounter and were so close to winning twice before being undone by the late, late frees. 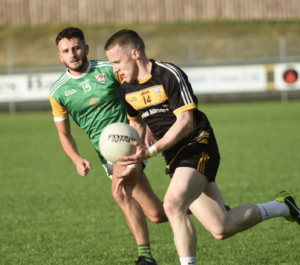 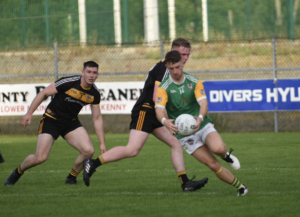 Downings were first off the mark but found themselves 1-1 to 0-1 behind after eight minutes when Christy Fildara McLaughlin found the net for the Inishowen side. It was tit-for-tat scoring for the next ten minutes with Malin still three ahead after 20 minutes. Downings hit the next three points, however, and it was level scores – 1-4 to 0-7 at the half-time break.

Downings hit the first two scores of the second half but four on the trot for Malin seen them lead 1-8 to 0-9 at the end of the third quarter. Two points over the next ten minutes had the teams level again with five minutes to go. Malin hit the front with a point in the final minute and but McGroddy’s deadball accuracy levelled the score. – 1-9 to 0-12 at the end of normal time. 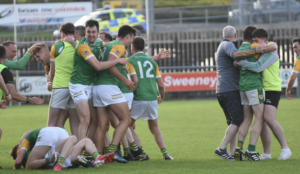 Once again, Na Dunaibh started the better with the first score in extra time but Malin led at the break 1-12 to 0-13. Scores from McGroddy and Cormac McGettigan levelled matters again before Alan Passoma edged Downings in front. Back came Malin with scores from benny McLaughlin, Christy Fildara and Adam McGettigan to lead by two in added time in extra time before McGroddy’s goal snatched victory from their grasp. 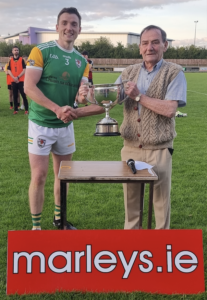 It has been a good weekend in O’Donnell Park for Sean MacCumhaill who cruised back into Division 1 this evening with a nine point win over Milford, following on from winning Intermediate Hurling Championship in Letterkenny yesterday. A goal late in the second half from StephenO’Reilly gave them a five point cushion at the break leading 1-8 to 0-6. It was relatively comfortable for the Twin Towns side in the second half with a Kevin McCormack goal extinguishing any chance of a Milford comeback moving the score to 2-14 to 0-10 with six minutes left on the clock.