Congratulations to Naomh Conaill, Yes Chef Catering Division 4 league winners this afternoon in Leitermacaward. The winners were 1-4 ahead by the 12th minute, the goal coming from Tony Byrne, and 1-6 to 0-2 ahead at the break. An early second half Mark McGinty goal put Glenswilly back in contention and when Dara Maguire hit the second as the game entered the final ten minutes there was just a point between the sides but Naomh Conaill held their nerve to run out 1-10 to 2-5 winners.

Naomh Conaill will seek to add two mor league titles next Sunday in Killybegs when they play in Division 1 and 1B finals, although Glenwilly will look to extract a measure of revenge in the latter.. 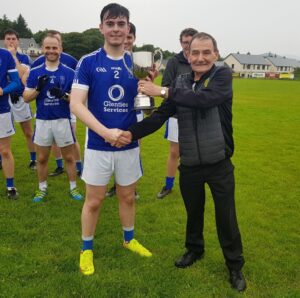 In Division 2, Four Masters and Naomh Columba finished their Marleys.ie Division 2 campaign with the Donegal side winning in Glen.