Donegal’s Ulster championship season begins tomorrow night in Ballybofey when Donegal take on Armagh in Páirc Sheain MhicCumhaill in the u20 Championship. The game will be played under lights with throws-in at 8 pm.

The link to buy rickets is  up on the home page of the Donegal GAA website.  Admission for adults is €10 and juveniles are €3. No cash will be taken at the gates. The Ulster minor championship begins with Donegal playing the winners of Down and Fermanagh on Saturday April 16th, with the senior champions out against Armagh in Páirc Sheáin Mhic Cumhaill on Sunday April 24th.

TheUlster U17 Development league – Jim McGuigan Cup – sees Donegal play Sligo in their final league encounter in Ballybofey on Saturday at 12 noon. With Cavan, Derry and Donegal all dropping points against each other a three-way tie on six points if both Derry and Donegal win this Saturday and the place in the final could go down to points difference. Cavan have a rest weekend having already played all four of their games. Admission to the u17s game is free. 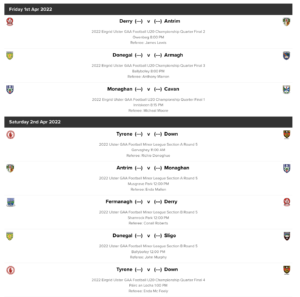