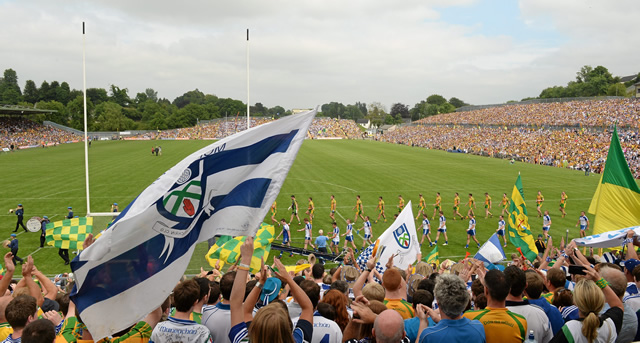 Ulster GAA are delighted to announce that ticket prices for the 2014 Ulster GAA Championships have been frozen for the 5th year in a row.

The Ulster Senior Football Championship will throw in on Sunday 18th May with the eagerly anticipated clash of Tyrone and Down in Healy Park, Omagh. This game will be followed by Derry v Donegal (Sunday 25th May), Fermanagh v Antrim (Sunday 1st June) and Armagh v Cavan (Sunday 8th June).

Interest in this year’s championship is already extremely high and it is anticipated that demand in many cases will exceed supply. For this reason, we would urge patrons to purchase their tickets well in advance of match day throw-in to avoid disappointment.

Tickets for all first round Ulster Football Championship games are now available to purchase from County Board offices*, gaa.tickets.ie and selected SuperValu / Centra stores.

* Please check with County Boards for arrangements regarding the allocation of their tickets.

Once again, Under 16’s will be able to access non all-ticket games free of charge when accompanied with an adult, and there are also concessionary rates for students and senior citizens. Anyone wishing to apply for a disabled pass should do so on a match-by-match basis through their County Secretary.

“The Ulster GAA Championships are the highlight in the Province’s sporting calendar and we are delighted to announce that ticket prices have been frozen for the fifth year running. We have listened to feedback from our supporters and have reacted by maintaining our pricing structure, increasing access to tickets and improving the overall match day experience.

“A key element of the Ulster Championship is the family friendly atmosphere and experience, and we are very proud that we can continue to offer free admission to Under 16’s for non all-ticket games, as well as concessionary rates for students and senior citizens so the Ulster Championships remain the best value games in the GAA calendar.

“We are looking forward to another colourful, exciting, entertaining summer of Ulster Championship action… Nothing Beats Being There!”

DOWN
SuperValu Downpatrick Down
SuperValu Newry Down

For all information relating to the 2014 Ulster GAA Championships view www.ulster.gaa.ie/ulsterchampionship2014