No cash will be taken at the gates at tomorrow’s Intermediate and Senior hurling finals in O’Donnell Park. The link to purchase tickets can be found on www.donegalgaa.ie or directly at:

The game is also been live streamed and the link for it and for the downloadable match programme are also available on the home page of DonegalGAA.ie

As well as previews of all three finals – Setanta won the Junior final earlier this evening – Tom Comack looks back on the Donegal Senior hurlers’ year and Damian Dowds reports on the 1997 Jubilee final. The final, won by Burt and played on Sunday 13 July 1997, was Naomh Mura’s last appearance in the county decider. The club, which had played at under-age level throughout the 1980s before becoming a fully-fledged adult club in 1991, drew its players from Inch and Fahan. The club was dissolved in 2001 and, in time, its members joined Burt.

Not alone are there links between the Burt team of 1997 and today (Fergal Grant and Mickey McCann are amongst the coaches), but there are links to the Naomh Mura team too. Gerard Boyle was a young corner forward back in 1997, and today he’s listed amongst the Burt substitutes. Donal Walker, the Naomh Mura wing back, is today the chairman of the Burt club. And corner back John McDermott is the father of Burt captain Caolan McDermott, and county captain, Ronan. 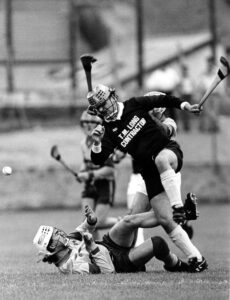