The 2022 Electric Ireland Celtic Challenge Cup for young hurlers begins this weekend with 39 teams from 29 counties taking part. The Donegal u17s face Tyrone In O’Donnell Park tomorrow with throw-in at 12 noon. admission is free. Manager, Adie Gaffey, has named his panel, as shown below: 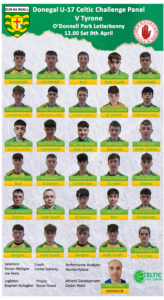 Established in 2016, the ethos of the competition is a developmental one with teams initially competing at group stages. Depending then on results teams are graded for the knockout stages giving all an opportunity to compete at their own level. The inclusion of second, third, and even four teams from some counties has proven very successful as it can result in teams from for example, Nicky Rackard counties playing teams from Liam MacCarthy counties in a final. It’s also a great opportunity for counties to give more players meaningful matches and so deepen their reservoir of playing talent.